Crime against women is a buzz that requires no introduction. Another gruesome crime makes its way into this panel with a 22-year-old girl facing the brunt at the hands of her classmate.

Nidhina Mol, a student of Food Technology at the St Thomas College Pala, Kottayam, Kerala had come to college to give her supplementary examination on Friday, October 1, 2021. Her classmate Abhishek Bajju who stabbed her belongs to the same class as her and has been taken into custody by the police on account of the murder.

Jose the watchman has been identified as an eye witness of the case. “The two of them were arguing under a mango tree,” he said to the police, “I tried to intervene and that’s when I saw blood spurting out from her neck.” Not only Jose, but many others have reported seeing them argue under the tree and him attacking her with a knife. 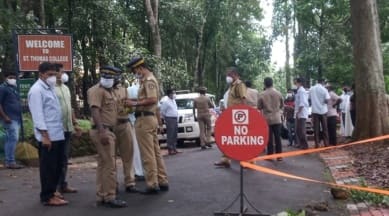 The crime scene at St.Thomas College,Pala

“The attacker then wiped his hands off the blood and calmly sat a few meters away. He didn’t try to run away. He sat there till the police came,” Jose added, speculating on how Abhishek had made romantic advances on Nidhina.
The incident happened around 11:30 am and the alleged Abhishek used a paper cutter knife to slit Nidhina’s throat. “She was breathing faintly as we brought her in the vehicle. But when we reached here, the hospital said she had passed away,” said one of the four officials who had rushed her to a nearby hospital. Some of the other students also saw Nidhina fall to the ground as she exited the examination hall and involved in an argument with Abishek.

Kottayam Superintendent, Shilpa Dyaviah has told the media that Abhishek has been taken into custody and the motive of the crime is being investigated.

This is not the first of such crimes as women have been subjected to unsafe terrains a lot of times with such gruesome murders and acid attacks making the headlines almost every day.

In July, 30-year-old Rakhil Raghuthaman shot 24-year old Manasa Madhavan in Nellikuzhi in Kothamangalam of Ernakulam district. Manasa was doing house surgency at the Gandhi Institute of Dental Sciences in Kothamangalam. Rakhil who killed himself had been stalking Manasa for days and planned the murder.

With such gruesome crimes on the run, the question of women’s safety still looms over our heads with no concrete solution in sight.