16-Year-Old Hyderabadi Girl Was Married Off To A 65-Year-Old Man For 5 Lakhs!

Disturbing photographs of a little girl in wedding attired with an old man were handed over to the police yesterday. From what looked like a wedding – the bride is 16 and the groom is a 65-year-old Sheikh from Oman.

The girl’s parents went to the police yesterday alleging that she was married off three months ago for Rs. 5 lakh, which was paid to an aunt and taken to Oman without their consent.

“If you don’t save me and take me from here, I will die…” the girl has reportedly said in phone messages to her parents from Muscat.

The teen’s mother, pleading for help to bring her back, has accused her sister-in-law and her husband of facilitating the illegal marriage for money.

In the photographs she has given the police as proof, the Class 8 student appears to be in her wedding attire with an elderly, grey-bearded man in a jacket. In another photo, the man is in white and the girl is in black. They were married in a hotel by a Qazi, the woman says. 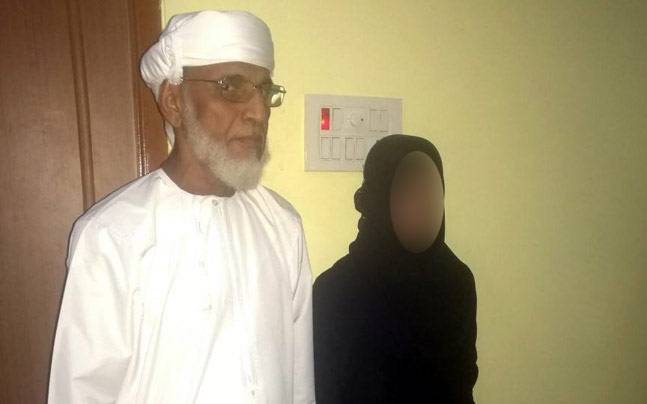 The man allegedly returned to Muscat after the wedding and later sent a visa for his child bride.

The woman says her daughter cried every time she spoke to her and wanted to return to Hyderabad.

“I spoke directly with the Omani national who married my daughter. He is saying that he paid Rs. 5 lakhs to Sikander (brother-in-law) and his wife and purchased my daughter and wants that money back, then only he will send back my daughter,” the woman said in her complaint.

Such marriages are tragically common in Hyderabad, which draws elderly men looking for young brides from poor families. Quick weddings are arranged for amounts that can go up to lakhs of rupees.