All Eyes On Them!

We all know that Rashmika Mandanna has been on a signing spree even since her acting in Allu Arjun’s Pushpa: The Rise. After the release of that film, she signed up for 2 Hindi films, namely Goodbye and Mission Majnu. She has now also signed her next Hindi film along with Ranbir Kapoor called Animal. The release date of Vikas Bahl’s Goodbye is now revealed. Meanwhile, she is working on Vamshi Paidypally’s Varisu as the female lead co-starring Vijay. The shooting for the film is currently going on and Rashmika has now shared an update from the sets. It was already revealed that Rashmika is a big fan of Vijay. This was revealed through photos that were shared from Varisu’s Pooja. Rashmika warded off the evil eye from Vijay back then and the photos went viral on social media. Now, Rashmika Mandanna is all smiles as she shares a perfect selfie with the Kollywood star. She captioned the Instagram story with ‘White Hearts’ and the title ‘Varisu’. 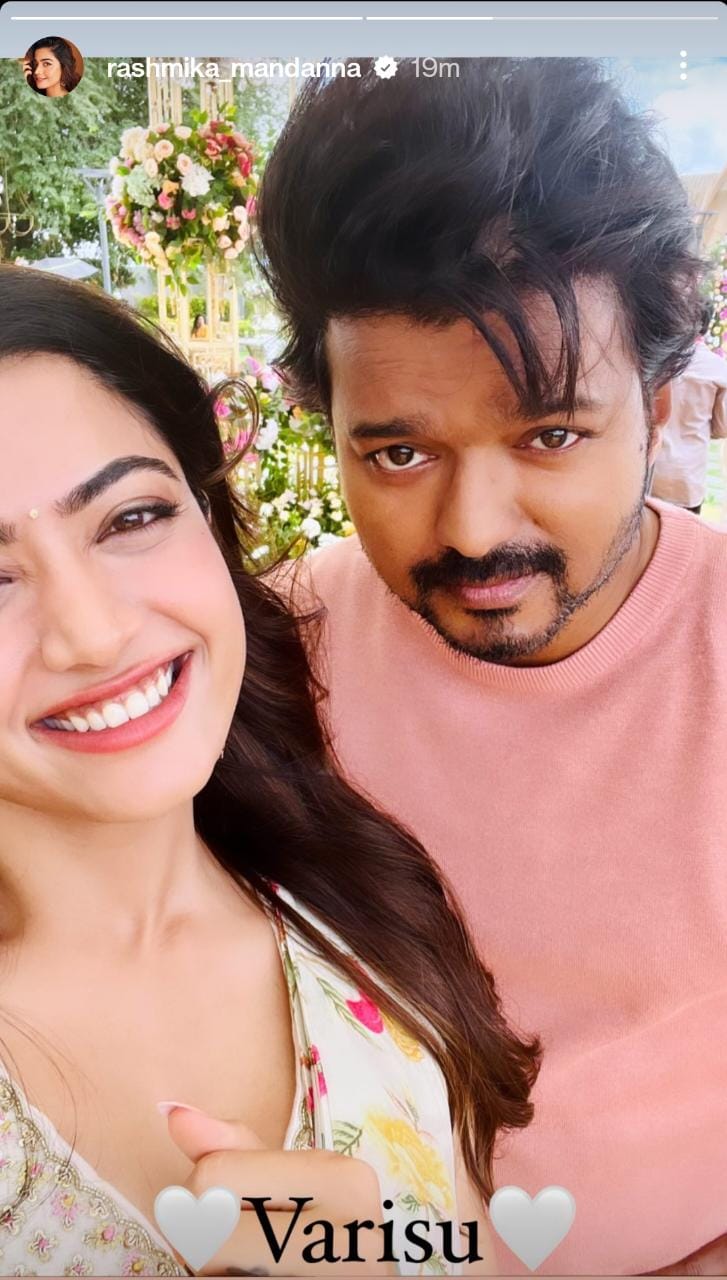 Previously the trailer of Goodbye was launched, and the Pushpa actress had gone to Lalbagucha temple ahead of the film’s release for special prayers.  Speaking at the trailer launch event, she shared her process of script selection, “I have always picked a script based on my gut feel. And believe what’s going to happen will happen. I don’t know what’s going to happen but I want to do good films. Till I am able to work this happily, I want to do this.” The actress was further quoted saying, “I want to say goodbye to the negativity around us or anyone. I am a very positive report and hope the world is also the same.” The film is scheduled to release on 7 October this year. Now, an old photograph of the Sulthan actress has gone viral on social media. This is a photo that was previously shared by Rashmika herself during the lockdown period. “Waiting for dearest Corona to leave like. 🤷🏻‍♀️😒 #throwbackthursday” she shared along with a baby photo of herself posing like the cutie she is.

Previously, during Sita Ramam promotions, Rashmika also gave a reply to these rumors. Rashmika opened up, “Sometimes, I am like ‘Arrey yaar, I am doing five films a year but you are still coming and asking me, ‘Who are you dating? What is your personal life?’ But I understand that we are actors and the light is on us, with people wanting to know more about you.” After saying this she also added, “You (people) can talk s**t about us, you can say negative things about it. Because in the end, we are public figures. We can’t choose just the good bits, thinking people just focus on work and not personal life. So, they are free to talk about anything, just don’t come to a conclusion. Till the time you hear from me, that is not true”.