M.S. Dhoni and wife Sakshi to be blessed with a baby?

In the recent IPL finale face-off in Dubai, Captain Cool MS Dhoni’s Super Kings lifted the cup with a difference of 27 runs against the Knight Riders of Kolkata. The fans have so much to celebrate with this season of IPL awarding the yellow army with so many victories.

Be it the subtle and cute prayer of Ziva during the match, the child who teared up for Thala’s qualifying finish, or the romantic proposal of Deepak Chahar to his girlfriend, this season gave the fans so many reasons to celebrate.

Adding to the celebrations, there’s yet another news that has made it out to the surface. Rumors have it that MS Dhoni’s wife Sakshi Singh Dhoni is pregnant and the couple is all set to become parents for the second time. 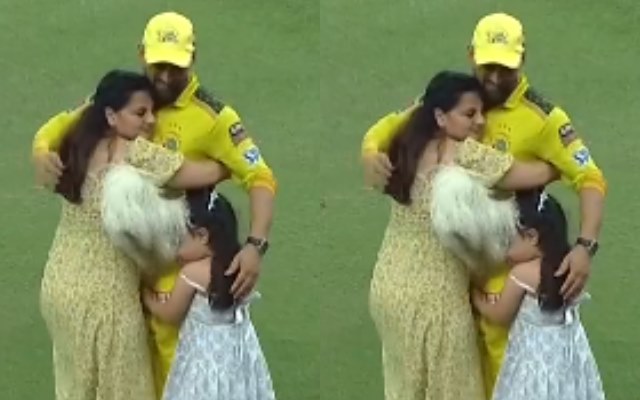 MS Dhoni hugging his family at the IPL finals 2021

A picture of the family hugging each other, post the finals in Dubai has made the rounds on the internet and this has led to speculations. Though the couple hasn’t addressed the speculations themselves, Priyanka Raina, the wife of Suresh Raina has confirmed that Sakshi is four months pregnant and is expecting their baby in 2022. While the speculations are yet to be verified, CSK and MS Dhoni fans flooded their social media timelines with adorable pictures of the couple with little Ziva.

It is heartwarming to note how when Ziva was born in 2015, Dhoni had chosen to serve the nation and hadn’t made it to Sakshi’s side and it was Priyanka who had conveyed the good news of Ziva’s birth. This adds layers to the speculation of Sakshi being pregnant again.

Talking about the couple, they grew up as childhood friends and tied the knot in 2008, and became parents with Ziva’s birth in 2015. Currently, Mahendra Singh Dhoni has joined the Indian cricket team as a mentor ahead for the ongoing T20 World Cup in the United Arab Emirates.