8. Vallavan – First Simbu’s character lies and then lies again and then hides things from the past. It was easy for anyone to see that Nayanthara’s character was not happy with the engagement and she did mostly to anger Simbu. This movie was double special for fans as it portrayed the real relationship of Simbu and Nayanthara that time and it was no wonder it became a blockbuster! 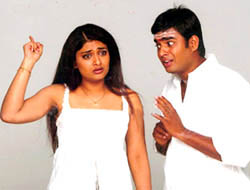 9. Nala Damayanthi – Although it was a fake marriage for a green card, Madhavan’s lovable character soon makes Geethu Mohandas’s character fall head over heels for him. As said before who can say no to Madhavan, which is why he is on this list again! 10. Kadhal Mannan – Last but not least, Kadhal Mannan, the best of all movies when it comes to stealing the fiance right under the villain, in this case, Karan’s nose. Ajith’s lovable portrayal floors the heroine and even though there are super strict house and a household that does not allow love at all, the movie ends on a happy note. This is the best of the list no doubt!