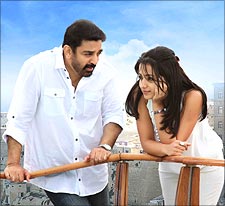 3. The sensation of the screen back then was Trisha and when she was paired with Ulaganayaga we knew we won’t be disappointed. When Madhavan was revealed to be the fiance we were more than surprised at the character’s jealous shade. True to its form, the jealousy pushed Trisha right into the arms of another guy and in this case, Kamal! 4. Remo – This one was one big turner! Although Keerthi’s character in the movie was engaged seriously and she was absolutely opposed to the idea of love and love marriage, Sivakarthikeyan’s character pursued harder and harder till the whole movie was just one big plot to convince someone to marry. Is someone in love so bad or is that a bit too much?