In a world full of movies with testosterone-filled action sequences and Heroism, Anjali Menon has brought to the table a film about motherhood, rather sisterhood during a vulnerable stage of pregnancy. While ‘women-centric’ films these days have a pre-set format of bold dialogues and modern choices, Wonder Women portrays flawed women who are all moody, irritable and hungry because of their pregnancy. The movie is a different take on womanhood and is a mixed bag in terms of the movie-watching experience.

Wonder Women is a film revolving around the lives of six pregnant women who all come together to ‘Sumana’- a place where Nandita (Nadiya Moidu) conducts pre-natal classes. All these women come from various backgrounds and have their own stories to tell. How these women travel together with their differences and opinions forms the rest of the story.

At the outset, you see that Anjali has conveniently placed all of these women at different backgrounds for diversity and heterogeneity of challenges. In fact, when the women start fighting over language in the opening scenes, you wonder if the distinct roots of the character are too forced. But, when Mini, played by a brilliant Parvathy, says that they’re all going to be screaming the same way when the baby comes, we are made to realise that the film is all set to talk about bigger things. 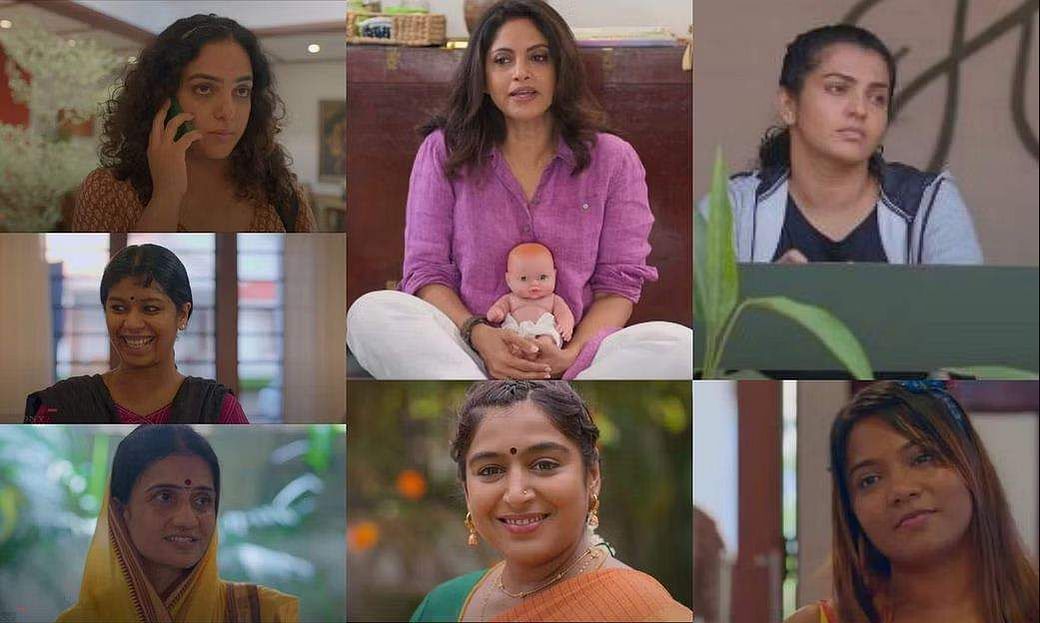 In some portions, the movie just focuses on creating awareness about pregnancy and motherhood. In fact, Nandita busts some myths and facts about motherhood like it is a public interest announcement. But, when we move into every individual’s respective story, we are intrigued to know more. Anjali Menon could have more boldly resolved conflicts in the film. We miss the sharpness that we generally find in an Anjali Menon film, be it Bangalore Days or Koode.

The movie does not have much of a purpose or a message. It is a concept to make people realise that pregnancy is not a joke, which is unfortunately still not understood by many in the real world. While Nandita calls these women ‘superheroes’, another character Saya, played by Sayanora Phillip, shares that she is not a “Goddess” and that she is just human. The movie pushes that women need not be worshipped for giving birth, but they should surely be respected. They deserve recognition for all the struggles that they go through.

Parvathy is bold and vulnerable as a single mother who goes through a range of emotions. While Anjali shows the lives of other women with their partners and families, she shows Parvathy all alone and by herself, reiterating her fear and insecurity to welcome a baby all alone. Parvathy’s demeanour and clear-cut expressions define her character, even when she has no dialogue. Nadiya Moidu gracefully guides all of these confused and perplexed women. She handles them with grace and sensitivity, all that’s required to handle emotional women. Nithya Menen is yet another delight to watch onscreen. She plays an excited mother-to-be onscreen who believes that she’s perfect. She pretends to be happy in spite of her problems, as she wants to be a better mother than her mother was to her. Padmapriya is strong with her opinions although she comes from a conservative background. Amrutha Subhash plays a wonderful Bengali mother from a lower middle-class setting. She is frightened about the real world, but is also strong about what works and doesn’t work for her. Sayanora Phillip and Archana Padmini also play striking roles.

Wonder Women has its goosebumps moment, as well as, its happy-tears moment. It is a short feature film in English featuring Tamil, Telugu, Malayalam, Kannada, Hindi and Marathi, here and there. It has an optimistic take on motherhood and makes us all lose our respective fears about pregnancy and parenting. After watching this film, many pregnant women would wish for a sisterhood that the women of Sumana get.

Verdict: Watch the film to fill your heart with the joy of pregnancy and motherhood!