Every time we step into the theatres to watch a Hollywood Superhero film, be it Marvel or DC, some part of us yearns for a superhero film from India as well. More so because India is full of fantasy stories and archaic cultural values and therefore there is a lot of scope to make a larger-than-life film. Brahmastra is the beginning of India’s superhero/fantasy journey as we step into Ayan Mukherji’s Astraverse.

The movie revolves around Shiva (Ranbir Kapoor), a DJ who falls in love with Isha (Alia Bhatt). He is also the wielder of the Agni Astra and is given the task to save the Brahmastra from the Dark Forces, led by Junoon (Mouni Roy). How he fights and manages to save the world, forms the first part.

It goes without saying that the film is a larger-than-life fantasy film. It revolves entirely around the worlds of Astras. The Astras are predominantly mentioned in the Mahabharatha. The idea behind Astras is that they are powerful weapons that are wielded using Mantras. Anybody who learns these Mantras can learn to wield and use these Astras. This movie also moves using the same format. 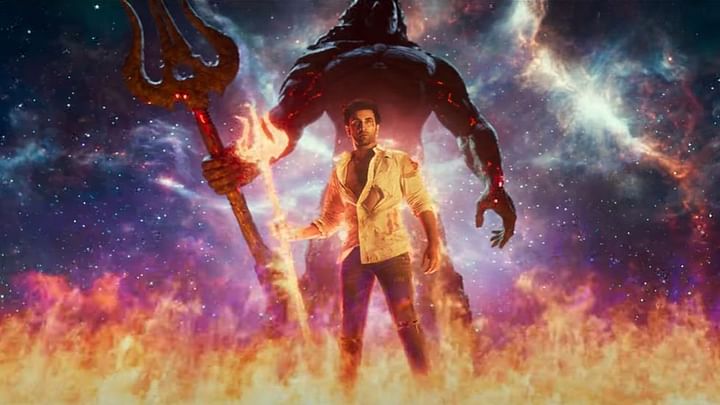 The movie is typically based on the Good Vs. Evil formula. The introduction sequence starring Shah Rukh Khan as Mohan is brilliant, and manages to give us a goosebump at the beginning itself. However, after this, the movie goes on to narrate Shiva and Isha’s meeting and the entire love track begins. The love track seems illogical and irrelevant in a movie about Astras and leads to dragging the film.

After about 30 minutes, we are back in the Astra world, and this is where the movie catches fire. We unveil fact after fact about a couple of Astras and their wielders. Nagarjuna plays Anish, the wielder of the Nandi Astra. The action sequences, where they try to protect the Brahmastra from evil, are where the real magic is placed in the film. The chase before the interval scene is one that should not be missed. It is choreographed with utmost dedication and brings us to the edge of our seats. The film’s biggest plus is its visuals. It is clearly a visual treat, and will mostly be enjoyed only if watched in the theatres. There is strong VFX and CG work that becomes the strength of the film. The colour palette chosen also acts as a positive for the film. For example, when the Nandi Astra is used by Anish, it reflects a blue colour because he is a good person. At the same time, when is used by Zoer (Saurav Gurjar), a villain, it reflects a red danger colour. These kinds of simple elements are given a lot of thought.

Nagarjuna and Amitabh Bachchan play important roles in the film, as they act as catalysts in making Shiva understand his true powers. Nagarjuna’s action rage in the film is unbelievable, given his age. Ranbir Kapoor and Alia Bhatt are extremely good performers. But, Alia Bhatt could have surely been put to better use. The story heavily relies upon her character Isha. But it feels like that character has no depth at all. Mouni Roy shines as Junoon in this film. She actually instils fear in us when she appears as the leader of the Dark worlds in the film. The main problem with the film is the writing. As much as the movie gives importance to the Astra world, it gives importance to the world of Love as well. Love is supposed to be the lifeline of the film. But it doesn’t work because we are given no logic to believe that Isha falls in love with Shiva literally overnight. It is also not plausible for us to believe that she trusts him so much that she takes a trip with him, all the way to Varanasi. So, in terms of writing the movie fails. The Astraverse and its fantasy ideas are what help the sinking ship to float.

The sound design of the film is also extremely powerful. The heavy BGMs are placed in the right segments just to give the perfect goosebumps moments. However, towards the end, the film becomes a little draggy, and we want the filmmaker to convey the climax already. In the end, we come to know that the movie’s story is nothing but a usual predictable good vs. bad one.

In the end, the movie is to be enjoyed for its visual grandeur. In that way, the movie really wins. If only the director decided to give more importance to writing, the movie would have won even more. If you go to the theatre, you surely will not come out disappointed. But, at the same time, you may also not come out mind-blown. This film is midway great and good and will work best if watched in theatres. All said and done, the movie has set an interesting premise for Part 2. Let’s see what Ayan Mukherji has in mind for the sequel.

Verdict: Watch the movie in theatres to enjoy a visual treat and nothing else!