How truthful is social media?

When it comes to Social media, anything and everything goes so far to the point that we don’t know what is true. After complaints filed by Kalyan Jewelers of certain individuals posting fake complaints of adulteration in their jewellery, The Dubai Police proceeded to initiate criminal charges against five people, for spreading false information.

The five accused in this case were all of Indian origin and will be facing charges levied by Cyber Crime department for using social media platform for fake accusations. A series of complaints attacking the brand and claiming adulteration started last year and Kalyan Jewelers had enough by November when they registered a complaint. One of the posts claimed that owners of Kalyan Jewellers in Dubai, was arrested for selling fake gold ornaments. It was also reported that one of the miscreants admitted to slandering the company’s name on purpose after an investigation. One post that is being widely circulated along with an invoice of purchase accused the jeweller of mixing wax in huge proportion in antique jewellery. 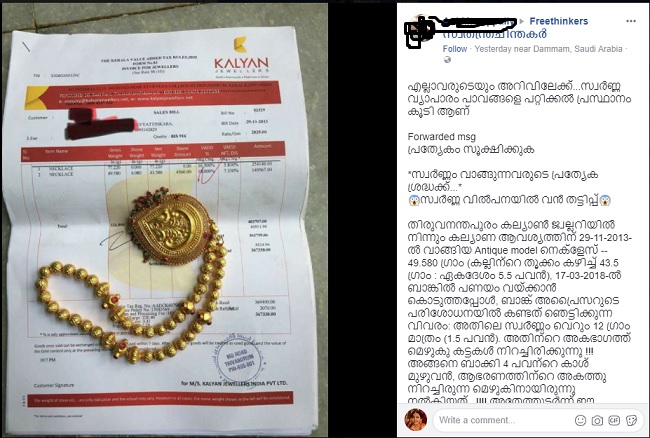 Speaking to The News Minute, Ramesh Kalyanaraman, Executive Director of Kalyan Jewellers, said “The first thing which we did when the social media attack started was to counter it on our own accounts and post the truth there. Then we complained to the police and we were waiting for the end result. Today, we have got a confirmation from the Dubai police.”

Saying that it is extremely important for brands to clear the air as soon as possible when false information about the brand begins to circulate, Ramesh said, “Unfortunately, brands can clear the air only in their own official social media pages. But that does not get shared as much as a post meant to defame the brand. People should exercise caution when they receive these kind of posts,” he said.

“It is very reassuring to see the steps taken by the Dubai Police to contain social media abusers. Perpetrators should know that social media slandering will not be taken lightly. A brand’s reputation is built over years by the contribution and hard work of many people. Such instances of fake propaganda by a few irresponsible individuals is an attempt to tarnish the image and reputation of brands. These acts have a deep impact on the emotions of all those associated with the brand and the company. I thank the UAE’s legal system and the Dubai Police for taking strict measures in preventing cybercrimes and establishing the truth in such situations.”