They really thought the entry of Bindhu Madhavi would change the strong game, didn’t they? However, it is just not working anymore and we, as the audience can see it. The reality game Bigg Boss that once caught attention of Millions of eyes has drastically dropped down like never before. Earlier, weekends used to excite everyone and fortunately, it still does. This is because Kamal’s way of hosting is just spot on and the way he deals with the House’s contestants is still brilliant. However, what I felt was that, Sakthi was not asked enough questions like Julie, Namithaa or Oviya. There wasn’t a spice in that seat. It wasn’t a hotseat anymore. I feel that Sakthi was liable to answer a lot more questions than just about Bharani and triggering. The interview was short-lived and not much of a confession. Things are slowly starting to lose.

I, as a viewer  truly believe that the main reason to watch a reality show like this one is for entertainment. Over the days the show popularised, everyone was excited to judge every contestant’s character -honestly, we differentiated between the good and the bad in two weeks. We judged so well that we created an army of fans for the most loved. More than that, we took away the good and the bad from them. We made sure that we shape our character more like Oviya and avoid Gayathri’s in life. Slowly, the entertainment turned out to be relatable.

However, after Oviya left the Bigg Boss house, it slowly started losing it’s charm. But, we knew that Oviya would be called for a chat by Kamal and there was also Julie’s elimination which got us really excited and would have wanted to see what Kamal had in store for her. That still is my second favourite weekend. The first one was when Julie’s lies were exposed! After all that happened, it almost felt like a huge wave just died down. So many of them slowly lost their interest in watching the show. In fact, once I tried watching it and was frustrated seeing Bindhu trying those carefree dance moves, but, sorry Bindhu, none like my Thalaivi Oviya.

The men of the house have now become more defensive. Sakthi was the only one who would add spice to a lot of fights. Now that he is gone, the other men are only making careful moves and its absolutely boring, to be honest. 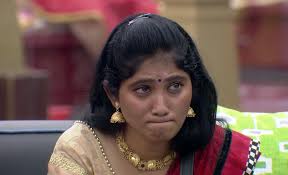 As far as Gayathri is concerned she is just going to be the same and she can never gain my attention. I’ve only been frustrated by her attitude. Raiza, well I really do not know what she’s trying but she isn’t good enough either. It looks more like a strategized, planned game to me than before. It’s been a week since I watched it last and I’m still not very excited. It doesn’t feel like I’m missing anything interesting.

The writers are also starting to lose ideas of tasks. These new ways of nominating a person is absolutely boring and none have a valid reason. These weird nomination tricks do not give an awesome “confession room” feel. Washing tasks, ironing tasks and fighting for the sake of fighting is now clearly visible and floating above. Kamal has informed that there will be new entries and I’m not sure how far that’s going to gain the audience’s attention. But overall, it’s getting annoying and meaningless. We do not take away any message from anyone anymore.

Maybe, there are chances that Gayathri’s elimination followed by her interview with Kamal and the live audience’s reaction might be interesting. I just hope he asks better questions to Gayathri and plays the “Kurumpadam” for her! After that, the love for Bigg Boss, which was once Tamil nadu’s favourite, might just die down!